Geometrical Arithmetic on a Two-Number Line.

A Geometry of Arithmetic

We'll work toward a geometrical description of arithmetic. In the last Post a number-segment on a Straight Line Segment(SLS) represented a number. A coordinate system is located, oriented, and scaled the segment. Representation of arithmetic on a SLS requires the representation of the second number in the arithmetic expression.  How does the number segment for the first segment locate, orient, and scale the number segment for the second number? That requires a second coordinate system, and it is built with the first number's number segment.

This may get a bit tedious, but I have to lay the basis out once and for all to make sure it works. At the end we will have a foundation to build subtraction on addition and division on multiplication. We also will have a strong footing for the physical model we introduced in a previous Post; we want a way to "see" arithmetic as an active process.

For addition our approach superficially looks like the usual one on a number line, but ours is a unified treatment of addition and multiplication that follows from the two possible ways to represent the combination of two numbers in a superposition of two number systems on one line. I would argue it is the inevitable extension of the ideas underlying the traditional number line to incorporate both addition and multiplication. It is the representation of

On the other hand, on a Two-Number-Line, addition and multiplication are independent variants of one process; and together they exhaust the possibilities of that process; they neither overlap each other, nor do they leave room for any other independent variant in the process: it is not an accident that we learn two arithmetic operations, and that those operations are addition and multiplication. Arguably, once we want the one number that represents the possible results of the commutative interaction of two, it is inevitable. And finally it is easy to draw a picture of the process, and even to make a physical model of it.

N1 and N2 are number operands.

In short we are now addressing the number side of the problem.
We are going to represent a number by a segment. For this we have to set a relative scale, the ratio of the length imposed on the Straight-Line-Space SLS) by coordinate system to the common-unit for addition or the product scale for multiplication. We shall assume it is 1; e.g. 1 inch on the SLS corresponds to 1 square foot, and etc.

For Co a Cartesian Coordinate System(CCS), with N the coordinate of P on a Straight Line Space Sp:

That's it for what a coordinate system does.

For a CCS the points on Sp whose coordinates differ by a fixed amount are evenly spaced.

Co is fixed on Sp by two points: P0 and P1 with coordinates 0 and 1 respectively.

A representation of a number, N1, on Sp, a SLS, is a geometrical figure that relates properties of the Sp to the number. With Co a CCS on Sp, the number can be represented as the geometrical figure: the line segment on Sp with its inner end at the origin P0 of Co, and its outer end at the point PN1 on Sp whose coordinate in Co is N1. Refer to it as a "number-segment" N1:Co : the representation of the N1 on Sp built with Co. It relates a number to the oriented distance of a point from the origin of a coordinate system.

Three steps are needed in the process to evaluate (N1 op N2) for op one of  "+" an "x". The first and last steps are common, the second is the isolated step particular to op.
1) For one of the two numerical operands, say N1, with a preexisting coordinate system C0 and the coordinate N1 = N1, construct the number-segment N1:Co on a SLS, Sp. Its outer end is the point PN1 in Sp.

2) One variant for this step is for addition; the other, for multiplication. In both cases it produces a point PN2 at the outer end of a number-segment  N2:COPo, This number-segment is constructed with a coordinate system COPo particular to the operator op.

It all worked out pretty much as advertised. Now that we have the notation, we can show another way addition and multiplication diametrically differ from one another.

For addition, the relation of the coordinate systems is a difference: 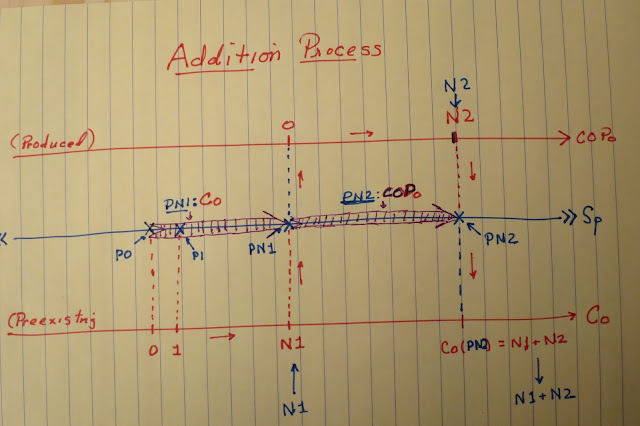 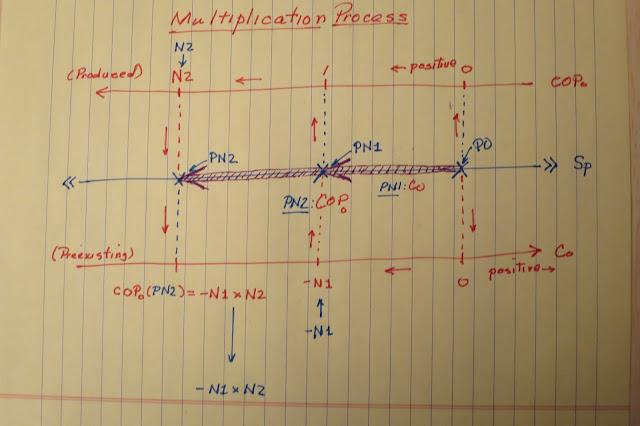 A coordinate system is determined by its origin, its orientation, and its scale. These three possibilities are exhausted by addition and multiplication.

We conclude:
It is not an accident that addition and multiplication, along with their variants subtraction and division, command so much attention. Understand them.
Posted by Mathemarize School Arithmetic at 10:47 AM